Mary Jane Kilpatrick was born in the locality of Teevickmoy or Tivockmoy in Donegal, Ireland. Here parents were George Kilpatrick and Janet Fairman. They were Protestants whose ancestors came from Scotland.

She married Alexander Pollock from nearby Liskeran Hill at the local market town of Stranorlar in 1870 and one month later left via England for Queensland on the ‘Young Australia’. They arrived in Moreton Bay (Brisbane) on 25 August 1870. Both Alexander and Mary Jane had close relatives who had earlier emigrated

The settled near Beaudesert close to related Donegal Pollocks, but soon moved to the Goulburn Valley in northern Victoria where Kilpatrick relatives had established farms.  The following Ulster-Scots families which settled in the Goulburn Valley were all from the same area of Donegal and inter-related Fairman, Crawford, Kilpatrick, Thompson, Baxter and Pollock.

Mary Jane’s brother Thomas Kilpatrick had first settled in the Goulburn Valley back in 1856, when we arrived with her uncles Robert Fairman Crawford and Richard Crawford  upon the ‘Mermaid’.

Mary Jane bore eight children, seven boys and one girl – with only five (all boys) surviving infancy. For more details of her life with Alexander Pollock in Australia and of her children – see the Pollock file. She died at Balldale in the southern Riverina on 16 September 1924 aged 76 years and is buried at Hopefield Cemetery.

George Kilpatrick was born in Donegal and married Janet Fairman (1810-1898) circa 1832 in Donegal. They were married for 62 years. His parents were:

According to the Irish Tithe Applotment Survey of Raphoe in 1833 the following Kilpatrick men farmed at Tivockmoy:

George was a farmer in Donegal for most of his life. He arrived in Australia, as a relatively elderly man on 30 July 1874 with his wife, four children and other relatives aboard the ‘Great Britain’. Interestingly they were listed as English, rather than Scottish or Irish. Many of his children had already settled. George soon secured a farm at West Mooroopna in the Goulburn Valley where he remained until his death 31 October 1895. He is buried with his wife at Mooroopna. This online map from 1908 shows two adjoining blocks of 376 acres between Mooroopna North & Undera (once known as Mundoona) – belonging to M.J. Kilpatrick. This is his son’s farm and is likely to be where George & Janet had lived.

Janet Fairman was also born in Donegal. Her parents were:

They were both born and buried in Donegal.

Janet Fairman was the eldest of ten children, including two others who emigrated to Victoria.  According to Alan Thompson, Janet Fairman’s younger brothers Robert Fairman Crawford and Richard Crawford changed their names to Crawford when they fled Ireland after ‘getting into trouble’ with the law.  It would seem that Richard’s nine month sentence was backdated to the date of his arrest in Feb 1855, which meant that he was released on or about 4 November 1855. Over the next fortnight, Richard, Robert (who was never caught) and their nephew Thomas Kilpatrick made their way to Liverpool to board the ‘Mermaid’ which disembarked at Melbourne on 11 Feb 1856. Janet’s siblings were were:

Janet died 6 February 1898 at the home of her daughter Mary Jane Kilpatrick (then Pollock) at Kyabram, where she had been living for three years since her husband’s death.

More information on earlier descendents of Janet Fairman can be found at Alan Thompson’s excellent site on Fairman family history.

The Kilpatricks in Ireland

Kilpatricks had resided in the Teevickmoy area for a very long time. According to Pynnar’s Survey of the Land Grants Given in 1608, Barony of Raphoe, Peter Benson was granted 1500 acres of land in Dongegal and on May 1, 1616 he leased several portions of his lands as follows ‘–Qr. of Tevickmoy to Sir Ralph Bingley, Robert Kilpatterick, James Kilpatterick, and Archiband McMathe’.

In the 1631 Muster Rolls of Donegal Protestants who could be called to arms, Crawford (sometimes Crafford), Kilpatrick (Kirkpatrick) and Stewart (Steward) were common names in the Raphoe Barony as well as in the earlier Pynnar’s Survey.

The online 19th century family history of the Crawfords of Donegal, while it doesn’t directly link with Elizabeth Crawford – it is a very interesting resource on the Plantations and the links back to Scotland. It mentions, on page 33: John Crawford of Lischieran [Liskeran] in the parish of Stranorlar, another grandson of Alexander Crawford of “The Point”, who is described in the Act of Attainder of James II (1689) as John Crafford, gent, Co. Donegal.

The Tithe Applotment Survey of 1833 lists the following Crawfords at Tivickmoy: James Crawford (either two blocks of land or 2 James Crawfords); and a plot of 75 acres farmed by John and Andrew Crawford.  It also lists the following Kilpatricks at Tivickmoy: George (16 acres); Robert (11 acres); Thomas (39 acres); and Alexander and John (18 acres). Also a Robert Kilpatrick at nearby Dunwilley (15 acres).

1 Mary Kilpatrick (about 1834-?). Listed by informant Kaye Kilpatrick as firstborn. It is likely she died young as her name was ‘re-used’ for sister Mary Jane.

2 Thomas Kilpatrick (1836-1904). Mary Jane’s brother, Thomas Kilpatrick (1836-1904), was the key figure in the migration of the Kilpatricks and others (perhaps including the Pollocks) to Australia. According to his obituary he started as a young man in the cattle business between the Irish and English markets with considerable success. He journeyed to Victoria on the ‘Mermaid’ arriving in February 1856. He spent three to four years ‘colonial roughing’ before returning to Ireland to marry Esther (Hester) Wilson (1836-1920) and re-enter the cattle business at Stranorlar for about 14 years. He returned to Victoria for good in 1874 bringing with him his parents, his wife and family and a number of other relatives. In 1875 he selected land in the Goulburn Valley at Kaarimba. This map of Kaarimba from 1884 shows Thomas Kilpatrick’s farm of 320 acres between Kaarimba and Waaia. However he soon moved back to business at nearby Numurkah as an auctioneer and grain buyer in the firm of Kilpatrick, Farrell and Co.. He then established the firm of Kilpatrick and Co. at Nathalia, and was well known as an auctioneer. Esther died in July 1920 at her son Richard’s house at Numurkah [The Argus 31 July 1920].

Thomas and Esther had nine children:

2.2 Thomas John Kilpatrick (1861-1934). He came to Victoria with his father. Thomas (Jr), better known as ‘Kil’ and later ‘Old Kil’, was a significant pioneer and benefactor in far north Queensland. In 1887 he managed Swallow and Ariell’s sugar mill at Cairns. However soon moved on to become a leading cattle man. He established a butter factory at Daintree near Mareeba, and was a local government councillor for 30 years. He has been dubbed the King of the Gulf. Linked is a most interesting obituary, as is this one also. He did not marry.

2.3 William James Kilpatrick (1862-1904). Known as ‘Willie Kil’ He came to Victoria with his parents in 1874. In 1891 he married Sarah Jane Baxter (1871-1948) from a neighbouring farm (daughter of John Baxter and Catherine Shirlow). He died 7 January 1904 at his residence ‘Arizona’, Nathalia from tuberculosis, leaving an estate of £8646. Sarah Jane remarried to James Richard Gracey in 1907. William and Sarah Jane’s children included:

2.3.2 Thomas John Leslie (Les) Kilpatrick (1894-1972). He seems to have been christened the above name but then recorded as Leslie John Kilpatrick. Born at Barwo (Nathalia) he married Grace Mildred Dunn in 1915 (1893-1935) at Carlton in a quiet wedding as Leslie was going into the army. He was soon discharged, having knee problems. He died at Malvern.

2.4 Eliza Jane Kilpatrick (1864-1917). Name reused. Born in Donegal and coming to Australia in 1974, she married John Campbell (1857-1915) in 1891. His interesting obituary. They lived at “Roseneath”, Bunbartha. The address is also given as neighbouring Tallygaroopna. Eliza Jane died at Tallygaroopna 21 October 1917. They had five children:

2.6 Matthew Kilpatrick (1873-1949). Born 8 Dec 1873 in Donegal he arrived in Victoria still an infant. Initially farming at Kaarimba, he like brother George, farmed in the Berrigan/Oaklands district, initially at Clear Hills and later at ‘Ullina Park’ about five kilometres northeast of Oaklands. There is a Kilpatrick’s Lane adjoining the property. He married Fanny Jane Pyke (1878-1919), known as Annie, at Berrigan in 1898.

After Annie died in 1919 a white marble tablet was erected in 1919 by the Oaklands Red Cross Society outside the Presbyterian church in her honour.

Matthew Kilpatrick became a politician. He was the member for Murray in the NSW Legislative Assembly from 1920-1927 and for Wagga from 1927-1941. He was the Country Party whip for some time. He was defeated at the 1941 election.

Matthew remarried to Mary Black (1889-1960) in Sydney 3 Oct 1921. I believe she was born in Hungary and may have come to Australia via the US. Her original name may have been Vilc Mari Black or Antal. She may have previously married a Mr Becker.  Matthew died 13 January 1949. Obituary here. Entry from the Parliament of NSW website. 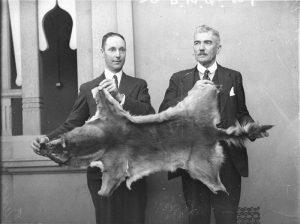 Alfred S. Henry and Matthew Kilpatrick (right) holding the pelt of the largest dingo ever caught, at that time. Source: Trove

4 Matthew James Kilpatrick (1843-1911). He was granted land at Mooroopna in 1872. He married Maysie Wemyss (1857/9 – 6 January 1919) in 1879. They were farmers at North Mooroopna in the Goulburn Valley, arriving with “Messers Thompson and Baxter”. He died at 21 Jan 1911. Maysie later lived at Toolamba with son Robert Kilpatrick. They had six children, although two died in infancy:

5 Mary Jane Kilpatrick (1848-1924).
She married Alexander Pollock at Stranorlar, Donegal in 1870 and one month later left via England for Queensland on the ‘Young Australia’. They arrived in Moreton Bay (Brisbane) on 25 August 1870. Both Alexander and Mary Jane had close relatives who had earlier emigrated.

They settled near Beaudesert close to related Donegal Pollocks, but soon moved to Northern Victoria.

Mary Jane bore eight children, seven boys and one girl – with only five (all boys) surviving infancy. For more details of her life with Alexander Pollock in Australia and of her children – see the Pollock file. She died at Balldale in the southern Riverina on the 16 September 1924 aged 76 years and is buried at Hopefield Cemetery.

6 Elizabeth Kilpatrick (Wilson) (1854-1943). She married Glasgow-born John Bruce Wilson (1851-1925). They initially farmed in the Goulburn Valley before moving into NSW to farm between Finley and Berrigan (1894) and Boree Creek near Lockhart (1902). Her obituary. They had a large family:

Thanks to Kaye Kilpatrick, Fiona Brett and Alan Thompson